Why defence needs to think local

Australian premiere Scott Morrison has announced that country will be spending $270 billion on defence because we are living in a "dangerous world". Essentially the Australians have decided that if push comes to shove with China they cannot be certain that the US will be there for them.
Now while Responsible Defence does not believe that the People's Republic of China is an immediate threat, and sees this development more as Australia bending over in the shower for the US defence industry (to raise spending to 2% of GDP) it is pretty obvious that China under Emperor President Xi is not afraid to use its power to get its way internationally and that the Chinese Communist Party's 1984ish response to Covid-19 bodes extremely poorly for any world order centred on Beijing as opposed to Washington. Thus while New Zealand may not want to be as intimate with US defence interests as Australia we can't ignore the fact that the CCP are only friendly when we do what they want -- which is essentially not friends at all.
All this begs the question of what happens if history was to repeat and a Covid-19 triggered depression in turn set off a major war (e.g China vs the USA) as it did with Japan during the 1930s?
Now the problem with thinking about wars is the tendency of people to think about the last one they were in. That becomes the model and almost a kind of self-fulfilling prophecy.The New Zealand defence establishment has a huge role (and budget) for maintaining New Zealanders strategic mindset locked in the history of World War Two. "We will remember them" they intone with religious conviction. And yet anyone who has studied the history of World War Two for more than five minutes can see that New Zealand's role in it was more of a giant cock-up than any result of clever strategic thinking.
The first problem with New Zealand in World War Two was that we thought we were part of Britain (which is actually about as far away from our country as you can get but still be on the same planet). This meant that when Japan attacked Malaya in December 1941 (at the same time as Pearl Harbour) New Zealand's only fighting division was in North Africa pushing back the Italian and German encroachment on Tobruk which the Australians had held so magnificently. In response to Japan's threat to their north the Australians withdrew all their divisions from the Middle East and brought them home to defend Australia (something the British were in no condition to do). But the 2nd New Zealand Division stayed in North Africa and fought its way up Italy along with the Americans and British. While New Zealand raised a two brigade (one short) 3rd New Zealand Division for the Pacific it (and much of the rest of New Zealand's contribution to the defence of the Pacific) was considered by our allies (Australia and the US) to be more of a token than serious effort by our country.
The real problem here was not small size, or lack of industry, it was a naive world view and a complete failure of strategic imagination. We suffered from the same problem as Britain, namely that the officers who joined the British Army were not that nation's best and brightest but were wedded to tradition, past stories of glory and a terrible need to prove themselves. The result was the disaster at Dunkirk where 400,000 soldiers - the cream of the British Army - had to be rescued by ordinary British boaties in the process losing 63,400 armour and vehicles and 2,500 field guns (basically all its heavy weaponry to fight invading panzers and dive bombers) along with 3,500 lives. To paraphrase Churchill -  never in the field of human conflict have so many professional military men had to be rescued from their own incompetence by so few civilians. 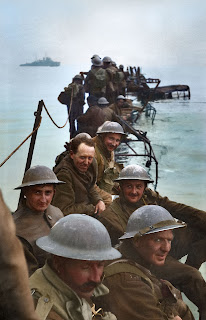